Around 2016 or thereabout, our paths crossed. We met in the house of Muhammed Idris Malagi, the Chairman of Blueprint Newspaper and in company of her friend, we had interesting conversations bordering on the relatively new government of the day and the strategies leading to the first ever victory of the opposition over a sitting government and some of the appointments that had been made then. 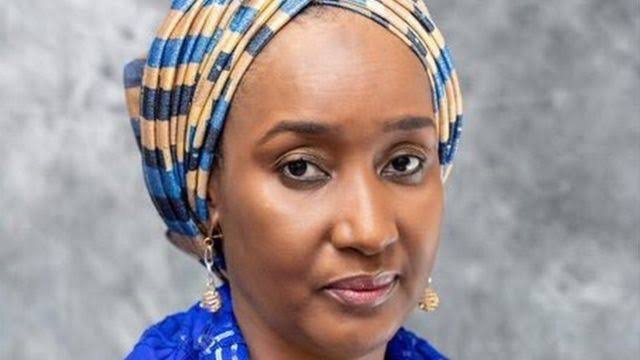 Through that encounter I could decipher glimpses from the inner workings of the APC in opposition, her loyalty and commitment to the party and the government of President Buhari even as she was yet to be appointed for any position in government.

I was not surprised when Sa’adiya Umar-Farouq was eventually appointed as Federal Commissioner of the National Commission for Refugees, Migrants and Internally Displaced Persons between September 26, 2016 to July 2019 and later minister in charge of the newly created Ministry of Humanitarian Affairs, Disaster Management and Social Development.

As minister, she already had her work cut out for her; the reason being her experience as a federal commissioner at the Refugees Commission and the prevailing circumstances of the prevalence of disturbing social issues, including IDPs and humanitarian crises all over the country engendered by 11 –year insurgency. It was expected that the new ministry would coordinate all the activities therein, with the hope of giving succour to these segments of the society, alleviate their suffering and lift their spirit.

Fortunately for the brand new minister and the ministry, some social interventions programmes such as NPower, tradermoni, marketmoni were already in existence leaving her with the responsibility of coordination and organizing of these activities.
The new minister took over all the NSIP programmes under her wings and has since initiated more. Nigeria’s unemployment rate stands at 27.1 percent as at third quarter of 2020 according to the National Bureau of Statistics.

Perhaps, the figure would have been higher especially with the advent of Covid-19, if the new ministry had not sustained the NPower programme, thereby keeping a substantial number of graduates out of the streets. Notwithstanding the euphoria that greeted her appointment, she was soon drawn into controversies because of the blight over the social intervention programmes, Covid-19 palliatives, complaints from NPower beneficiaries, and was even personally maligned, but she remained resolute and undeterred in her mission to work on issues close to her heart.

The minister has since initiated the first ever grant for rural women, having flagged off the programme in Plateau state earlier. It is a one-off payment of special grant of 20,000 for 150,000 rural women in the 774 LGAs, disbursed to mark the International Day of Rural Women recently, with the hope that the grant will “ increase access to financial capital required for economic activities”, while hoping that the “beneficiaries of the programme will make good use of the opportunity to increase their income, enhance food security, and generally contribute towards improving their living standard”, the minister said during the event.

She stated that the new enterprise has added value to the administration’s mission to lift the poor out of poverty: “since the inception of President Muhammadu Buhari’s administration in 2015, government has been paying more attention to protecting and promoting the poor and vulnerable in the country. This informed the decision to initiate the National Social Investment Programme (NSIP) as a strategy for enhancing social inclusion. The grant for rural women was introduced to sustain the social inclusion agenda of the Buhari administration including the realization of the national aspiration of lifting 100 million Nigerians out of poverty in 10 years. It is designed to provide a one-off grant to some of the poorest and most vulnerable women in rural Nigeria”.

Tagged Building rural women’s resilience in the wake of Covid-19”, the grant is already being hailed as life-saving for a segment of the populace struggling to survive in the wake of the global pandemic. “I’m convinced that that this programme will achieve the desired objectives with the kind of beneficiaries I have seen in Bauchi”, Dr Salihu Ladan said. Ondo state governor, Oluwarotimi Akeredolu also eulogized the federal government for conceptualizing various social programmes to help the poor.

Speaking on the programme, during its launch in Ondo state, Akeredolu said, “the people of Ondo state appreciate the federal government for all these social investment initiatives that have transformed the lives of rural women in our state. Many of these women have transited from poverty to relative prosperity. They run their businesses now with the most probable potentials for expansion. The Ondo state government is highly delighted for the initiative of empowering rural women as social inclusion and poverty reduction agendum. This initiative is in consonance with Ondo state government’s aspiration to lift a sizeable proportion of women out of poverty. It is in realization of this that the government always keys into social investment programmes in ensuring the provision of a reasonable means of livelihood for the poor and vulnerable especially women”, the governor said.

Besides the grant for rural women, the biggest impact of the new ministry under Hajiya Sa’adiya Farouq, is the establishment of the disability commission. Credit must be given to Minister Umar-Farouq for the take-off of the National Commission for Persons with Disabilities, following the appointment of the executive members of the commission by President Buhari in August this year. She was quoted to have expressed her joy at the commission’s eventual take-off. “Today is a very happy and fulfilling day for me as one of the vulnerable groups that are close to my heart finally have a commission and executives in place to cater to their needs, protect their rights and provide an enabling environment for them to maximize their potentials, thrive and contribute valuably to the society and the nation as a whole”, even as she added that accenting to the bill and appointing its executives has “proved President Buhari’s commitment and desire to improve the quality of life of vulnerable groups …ensure they enjoy their full rights and privileges as citizens of Nigeria”.

Nigeria has over 30 million disabled people; hopefully, this commission will formulate policies and law to improve their lives and enhance their welfare, including that the disabled get fair share of available government jobs, and further ensuring the provision of facilities and amenities that will make physical movements easy for the disabled all over the country.

So, from tradermoni, marketmoni, farmermoni, Npower, conditional cash transfer, home grown school feeding, special grant transfer, public workfare and skills for jobs, youth employment and social support operation and now rural women cash grant, and other federal government’s interventions, there is no denying the fact of their existence and remarkable impact, in comparison with the near absence of such programmes as it were.

As commendable as the new initiatives are, there is the need to increase the number of beneficiaries of these programmes. Statistics have shown that when the living condition of rural women improves, the lot of children also improves. And since lack of gainful employment and poverty are intertwined, the minister is implored to expand the frontiers of the programme with the hope of taking more people out of poverty.

The social dislocations and refugee crisis arising from conflict in the North east has left Borno alone with 240,000 displaced persons, according to UNHCR. And 7.1 million people are said to be in need of humanitarian assistance; shelter, food aid, health and education according to the UN. And 80 percent of displaced persons are women and children. In recent time, over 500,000 have been displaced in the North Central due to crimes and criminalities associated with banditry and farmers/herders conflicts.

Climate change, unplanned settlements and city slums exacerbated floods in communities which in turn have caused the displacement of communities and people generally who need relief from distress.

The ministry of Humanitarian affairs need to do more work in coordinating with NEMA and NCFRMI to bring smiles to the faces of displaced and dislocated families and possibly relocate others from flood-prone locations, while those already dislocated should be resettled.

The new ministry in conjunction with other relevant government agencies should be proactive in developing a national policy on humanitarian crisis and disaster, conflict management, just as she articulated that of disabilities commission rather than impulsive and sometimes knee jerk reactions to issues when they unfold.

Besides, there are so many NGOs doing some activities on humanitarian and charity issues, disasters and crisis and emergency management. Their activities and modest efforts should be moderated and well-coordinated by the ministry. In due course, a census of such NGos and their undertakings are required for proper planning and collaboration for the good of all Nigerians.